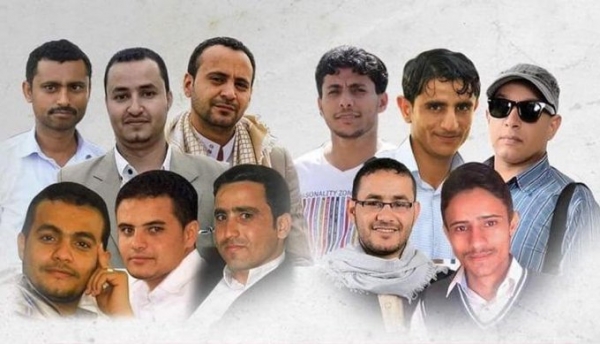 Yemen: On the world press freedom day, Right Radar calls on the Houthi to abolish the death sentence of 4 journalists and release the remaining media prisoners

Yemen: On the world press freedom day, Right Radar calls on the Houthi to abolish the death sentence of 4 journalists and release the remaining media prisoners

Rights Radar for Human Rights in the Arab World based in Amsterdam has called on the Houthi armed militia to cancel the “death sentence” against the four journalists, namely (Abdelkhaleq Omran, Akram Al-Walidi, Harith Hamid and Tawfiq Al-Mansouri).

It also has called for releasing them with their colleagues, namely Hassan Annab, Issam Belghith, Hisham Tarmum, Hisham Al-Yousifi and Haitham Al-Shehab who have been abducted since June, 2015.

Unluckily, the World Press Freedom Day on 3rd of May comes for the sixth time while the press freedoms and those who work in the press and media field in Yemen are still subjected to repression and obfuscation and this is the worst situation of the local press since decades.

While the world celebrates the World Press Freedom Day, hundreds of Yemeni journalists and media workers are still dispersed in the places of their forced displacement and some of them are still being abducted in prisons and they are only charged with performing their journalistic work for demonstrating the truth.

There is nothing new to talk about regarding the Yemeni journalists on the World Press Freedom Day except that they are still exposed to abuse and harassment because they are the easiest target to reach.

On this occasion, the Amsterdam-based Rights Radar for Human Rights calls on all parties to the conflict in Yemen to respect the press freedoms and the international conventions ensuring freedom of the press to which the Republic of Yemen has committed.

Rights Radar stresses the necessity to end the unilateral control in the areas controlled by the armed militias (the Houthi militia in the north areas and the Transitional Council in Aden and its environs). This makes the press and media workers adopt only one opinion for the benefit of certain groups and this contradicts the goals of the journalistic work.

At the moment, dozens of newspapers, channels and press websites are still prohibited from performing their work for years as a result of the systematic campaigns of persecution, intrusion and harassment that badly affect all the journalists opposing the Houthi militia in Sana’a or the Transitional Council in Aden. As a result, the journalists and media workers have suffered a lot from this situation and this has a bad effect on their living and psychological stability. Therefore, many of them are forced to emigrate or work in other jobs to secure the minimum standard of living.

In fact, the year of 2018 is considered the worst period for journalists in Yemen with a number of 18 martyrs working in the press and media field. However, the repression and abuse still threaten the lives of all journalists in various areas without exception. This makes Yemen come in the 170th place in the list of world’s countries in terms of the respect for freedom of the press.

Therefore, Rights Radar calls on the international community, especially the United Nations’ agencies and the relevant international organizations to put all possible pressure on the parties to the conflict in Yemen to ensure the press freedom. It also calls for putting more pressure on the Houthi militia as it is the most violating party. The Houthi militia must be obliged to respect the international conventions that ensure the right to expression and the journalistic work and release the abducted journalists who are in its prisons for years, especially some of them are suffering from the health deterioration as a result of torture and abuse in the Houthi prisons.

On this global occasion, Rights Radar joins hands with the Amnesty International, Human Rights Watch, the International Federation of Journalists and the other organizations to call for the release of all journalists.

Oral statment of Rights Radar foundation and the International Institute for Rights and Development at the 45th session of the Human Rights Council in Geneva
Yemen: rights radar strongly condemns targeting civilians in Sana’a and Taiz by the Saudi-led coalition and the Houthis-Saleh forces
Yemen: Rights Radar Calls on Houthi Militia to Put an End to Abduction of Girls and Women in Sana’a and Areas under its Control
Yemen: On the world press freedom day, Right Radar calls on the Houthi to abolish the death sentence of 4 journalists and release the remaining media prisoners
Yemen: Rights Radar calls on the int, l community to intervene to curb grave abuses in Aden and Abyan