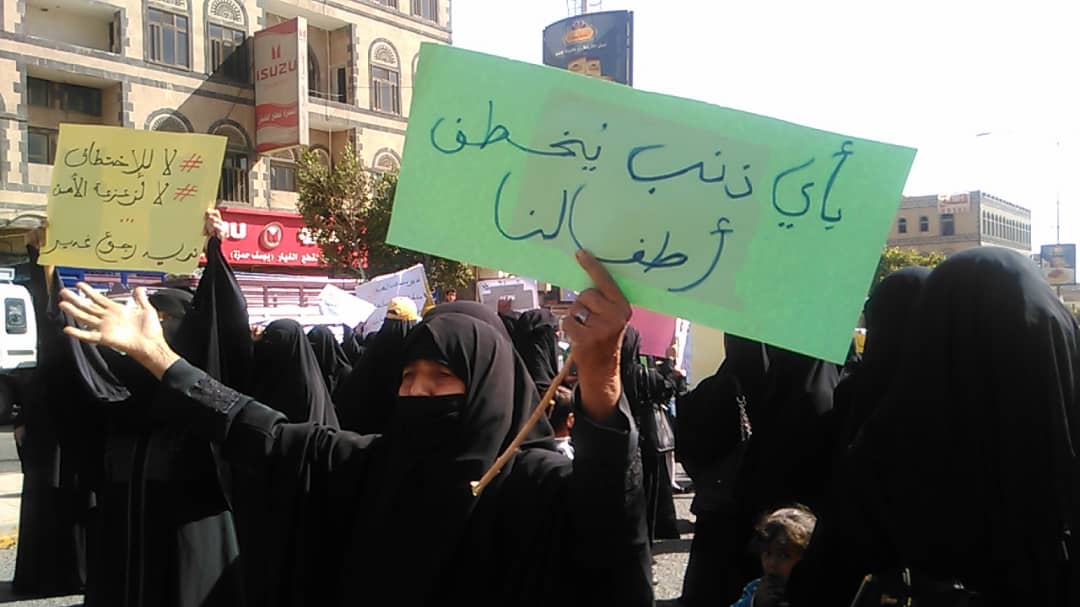 Yemen: Rights Radar Calls on Houthi Militia to Put an End to Abduction of Girls and Women in Sana’a and Areas under its Control

Yemen: Rights Radar Calls on Houthis to Put an End for Abducting Women in Sana’a and other Areas

The phenomenon of the abduction of girls, female students and women have increased unprecedentedly in the Yemeni capital, Sana’a, and the areas that are under the control of the Houthi group in Yemen.

According to the eyewitnesses who did not disclose their names for security reasons, more than 35 girls and female students were abducted from study places and streets in the capital, Sana’a, during the last short period. Some of them were abducted for putting pressure on their families or due to false and malicious reports, while others were abducted for unknown reasons. Many sources told Rights Radar for a human rights that the hiding and disappearing places of the abducted female persons had not been known to the date of issuing this statement.

According to these sources, a number of girls, who were learning sewing clothes at one of the sewing instructors’ workshop, was abducted after giving them an unknown anesthetic substance and they were moved to a brothel, and then to prison. According to the sources, this abduction was carried out in Al-Tawila city of Al-Mahwit Governorate, which is under the control of the Houthi group.

A father of one of the abducted girls told Rights Radar that his daughter was moved from a brothel to prison in Sana'a city with the other 30 abducted women from different areas. Adding that they refused to deliver his daughter to him until now. The abducted girl’s father appealed to the human rights organizations to urgently intervene and play their role to release his daughter and other female abductees and to stop this crime committed against their daughters and protect their honor and reputation.

Every day, the photos of abducted girls are put in the streets and schools in Sana’a, and via the social media to appeal to those who can recognize them to inform their families via the phone numbers written next to the photos of those abducted victims.

Just last week, 3 girls were abducted in the capital, Sanaa, including two sisters, the elder sister is 18 and the younger one is 13, in Al-Anab neighborhood in Sana'a on Sunday morning, December 8, 2019, while they were on their way to work in the neighborhood of Al-Nahdha. The third one was an eighth-grade primary school girl who disappeared at 6:30 p.m. on Saturday, December 7, 2019, in front of her house in Maeen District in Sana'a. According to eyewitnesses, the abductors were a female militia affiliated with the Houthi group.

The armed elements belonging to the Houthi militia in Sana’a attacked a language institute in Haddah district in the capital, Sana’a, on Monday, December 9, 2019, and abducted women working in this institute. This attack and abduction were directed by a leader in the Houthi militia who was believed to be the director of a criminal investigation in the capital, Sanaa. Charges of violating honor and morals, including the charge of prostitution, were fabricated against the abducted women to justify the abduction and the enforced disappearance.

According to this organization, the Houthi militia, with the involvement of its judicial agencies, moved the first group of 55 abducted women prisoners from private secret prisons to public prisons after fabricating charges and taking photos for them during the abduction period for the purpose of extorting them and diverting attention from these crimes. It states that it has firm and unequivocal evidence on the abduction and torture committed by the Houthi militia against the abducted women.

Rights Radar calls on the de facto authority of the Houthi militia in Sana'a to quickly investigate these crimes and abuses in order to reveal and prosecute the perpetrators as these acts represent a dangerous precedent that affects honor and reputation and seriously offends the abducted victims’ families. They are also considered as a disgrace and a major crime in the Yemeni society that is incompatible with all laws, religions, values, morals, honor, prevailing tribal customs, and international charters. It is an unprecedented crime, especially in Yemen, and a dangerous indicator that may lead to adverse societal reactions in defense of the honor and dignity of women.

Rights Radar stresses that such serious abuses committed against girls, at their early ages, and women in Sana’a and the surrounding cities, that have not previously occurred, contradict the declared values and morals of the Houthi militia since takes over the capital Sana'a and a number of Yemeni governorates.

RR has called on all the local, regional and international organizations and institutions concerned with the rights of women and children, to take quick actions to stop these immoral and inhuman crimes and practices, break the silence about them as they are crimes and abuses that cannot be tolerated. RR asked the international community to make pressure on the Houthi militia, by all possible means, to compel them to put an end to this futility and these crimes and abuses committed against the rights of women and girls.