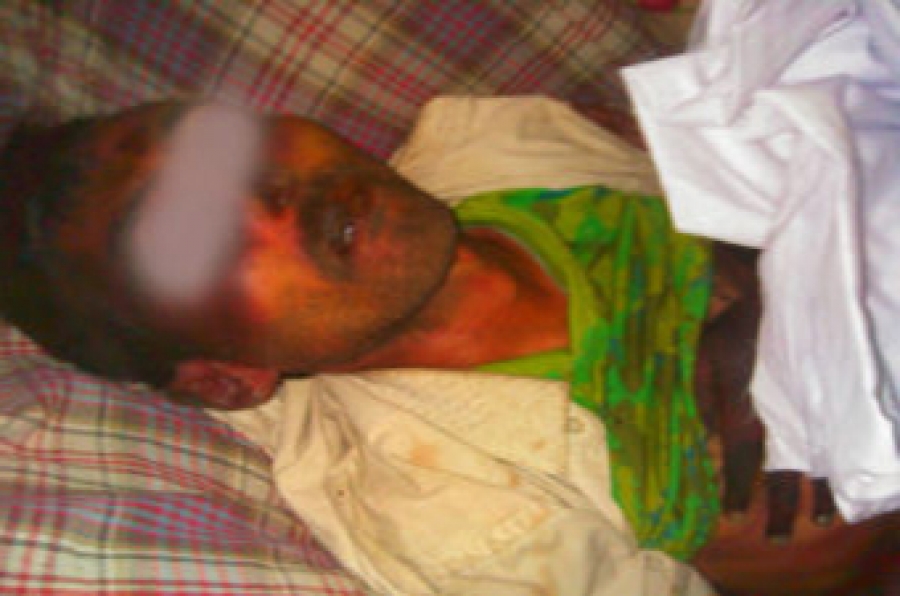 RR stated that it had investigated 113 killings under physical torture carried out in illegal detention centers run by the Houthi rebel group in the capital Sana’a and other cities under Houthi control, along with some other death cases of civilian detainees in prisons run by Yemeni forces loyal to the UAE in the governorates of Aden and Hadramout, southern Yemen.

Ali Muhammad A’ayedh al-Tuwayti, 35, died after having been tortured to death in the city of al-Radhma, Ibb province, central Yemen, by the Houthi’s prison guards. Al-Tuwayti is number 113 of the persons that died as a result of physical torture in Houthi detention centers in Yemen.

RR confirmed that the Houthi gunmen kidnapped al-Tuwayti on November 19, 2017, at a Houthi checkpoint in the city of Demt, Dhalea governorate, on his way to his hometown Yareem in the Ibb governorate.

Al-Tuwayti’s family had missed him since the day of his arrest until he was found dead in the mortuary of the hospital in the city of Yareem. His body showed severe signs of torture, RR added.

“Al-Tuwayti died on November 22, 2017 after having been subjected to brutal torture for three days in the Houthi detention center in al-Radhma, Ibb governorate. His family received his body from the Houthi militants at the end of December 2017 and buried him on 1 January 2018”, a security source said.

A medical source told RR that “the injuries on al-Tuwayti’s body demonstrated that he had been subjected to physical torture, severe beating, wounding with sharp instruments and burning with boiling water, that changed the color of the skin of his body and caused deformities of his body shape”.

On November 27, 2017, another detainee was reported died as a result of torture at a detention center run by the Houthi group in the city of Zabid, Hodeidah governorate, west of Yemen. Hasan Salem Ahmed, 25, died a week after having been detained at a Houthi prison next to the Faculty of Education in Zabid, where he was subjected to brutal torturing until he died.

On October 25, 2017, Ahmed Saleh al-Wahhashi was brutally tortured to death in the Houthi prison in the Habra district of the capital Sana’a, which resulted in the fracture of his spine, the main cause of his death.

Al-Wahhashi was arrested on October 15, 2017, by Houthi gunmen in the area of Methwaqin in the governorate of al-Baydha, central Yemen. He was detained in the central prison of the al-Baidah governorate and then transferred to the prison of the Habara district in Sana’a, where he died 10 days after his arrest.

The sources of human rights NGOs estimate the number of detainees inside Houthi detentions at 7,000, distributed over 643 illegal prisons across Yemen. Most of these detainees belong to the Yemeni Islah Party. Their number recently grew with the new detainees, members of the General People’s Congress (GPC) of former president Ali Abdullah Saleh after the Houthi militants assassinated Saleh on December 4, 2017 and subsequently started to arrest GPC supporters in Sana’a city.

The international relations officer and spokesperson of Rights Radar, Mr. Gerard van der Kroon, said “the cases of murder under torture are serious violations of human rights that should be qualified as War Crimes leading to individual criminal responsibility under International Criminal Law and that should not go unpunished”.

RR strongly condemned the frequent occurrence of torture related death cases in Houthi detention centers and UAE-backed Yemeni prisons, as they are serious violations of Human Rights in Yemen that the international community should no longer tolerate.

Mr. Van der Kroon called upon the international community, and the United Nations in particular, to take deterrent measures against the perpetrators of these violations and to hold them accountable for violating the right to live of those who are victims of the weakness of the failing Yemeni state authorities, that are not able to defend the safety of their population and guarantee compliance to the Laws of War by the warring parties.